Bear and Gunner trained with Unleashed Potential K9 because they would fight with each other in the same home, with no known trigger. Their owners were living a stressed out life with a baby on the way, managing two dogs that they were too afraid to have out together. Once we determined that their trigger was resources, we were able to start rehabbing their relationship. Apart from that, Gunner used to act extremely fearful when people would come to the house, refusing to socialize. After 4 private lessons and 3 weeks of Boarding and Training, here is what their owner, Jasmine, had to say. 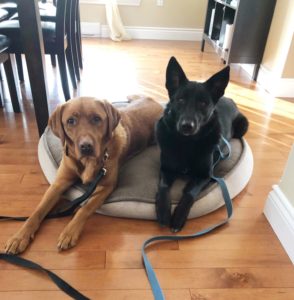 We have people over for a regular poker night. Normally Bear would be downstairs with the guys and Gunner would be in the bedroom before anyone even showed up because he would lose it and bark out of major fear. That’s where he’d spend the night. I’d tried to bring him downstairs before but there was too many people, he’d bark and run away.

I left Bear in the kennel and put Gunner on Place. Our first friend arrived and Gunner didn’t bark, he was happy. Eventually we broke him and he smelled our friend and didn’t seem too bothered. People arrived one by one which worked great, it gave Gunner time to see them and they all knew better than to try to approach him because that was the closest they’d ever gotten to him!

To make a long story short (sorry but I’m flabbergasted)… he didn’t bark once at anyone and didn’t run away. He even wagged his tail when a few people petted him carefully and gave him treats.

We got Bear out and placed them both. I went even a step further and brought him down to the poker room and this is where I was mind blown…He came in and walked around the table wagging his tail! Being normal. First time he ever went in the basement during a poker night, and he was comfortable and not sketched out. Some of these guys had never even seen Gunner because he was always hiding, and Bear did amazing too! He let Gunner do his thing and didn’t bother him, he was calm and obedient and respectful. Bear is getting some bed time with the guys and I’m with gunner upstairs on bed so they can each relax. ”

Are you at your wits end with your dog’s behavior and would like to have control, sanity, and above all else, safety? No matter the age or breed, please contact me now,  I assure you, I can help!

Not in my area? Find a trainer near you!