Don’t worry, he’s friendly; he’s never bitten before. Famous last words that many of us have heard time and time again. As a dog trainer, I look back on the many times I have taken other people’s word on this and honestly cannot believe that I haven’t found myself in more trouble.

These days, I consult with numerous dogs of varying degrees of dominance and aggression every week, making a point to ensure each one is secured properly on lead, never taking a moment to ‘get to know’ any dog by touching or getting in their space. Unfortunately for me, this wasn’t always the case, but I learned my lesson the hard way.

I remember when dropping Tank off for his board and train a few years ago, before I became a trainer, despite how many ways I expressed that he was relaxed and happy to be meeting his new trainer and would in fact not have any problems, I was instructed to put his muzzle on before they would begin. At the time, although I did what was asked of me, I didn’t see the necessity in doing so. These days however, I can most certainly appreciate the precaution, but ‘why,’ you ask?

Lets go back to September, 2015 when I first met Baxter. I was called to do an in-home consultation for an insecure dominant yet friendly newfoundland/bernese mountain dog with poor greeting skills. I came to the property and was met outside by a 115lb dog being held on lead by an owner who appeared to be at least half his size and weight. Baxter was pushy and dominant, but since he appeared relaxed and his owner, the person who knew him best, said he had no bite history, I allowed him to come into my space so I could see first hand how rude he was when greeting strangers. Moments later Baxter grew tired of my presence and laid on the ground next to the patio furniture where he remained throughout the duration of my time there, and that was that. 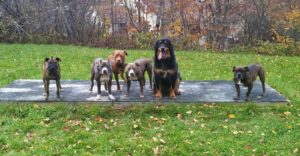 A few weeks later, Baxter was signed up to come for a board and train and I was back at his house to pick him up. I did as I always do and brought my brief case along, the very same brief case I bring as precaution to protect myself in case a dog tries to attack me during a consultation. However, since I had met Baxter on his property just weeks prior and it went so well, I let my guard down. I put my defence mechanism on the BBQ so that I could load this very large dog into the car before going over the necessary paperwork with his owner. I looked at the narrow steps leading up to the door and the very large dog right behind it, and decided to stand back at least 20 feet to allow as much space as necessary for the duo to meet me outside safely. What happened next, was over just as quickly as it began.

As I stood in wait, Baxter pushed his way out of the door dragging his owner behind him, barrelled excitedly into me, wrapped his leash around my legs, and jumped up and bit me. Despite quickly turning away, he had a clear shot of my face, and he succeeded. Not wanting to exasperate the situation, I quickly covered the wound with my hand and went inside in search of a compress and a mirror. Afraid to look, I peeled my hand away and covered it back up just as quickly.

After a 2 hour visit at the hospital and some stiches, I was back at Baxter’s house where I promptly instructed his owner to place a muzzle on him before I loaded him into my car, something I now know I should have just done in the first place. I never hesitate to muzzle an aggressive dog, but Baxter was friendly, wasn’t he? Obviously, be was not as friendly as everyone thought and despite what happened, everyone involved was extremely lucky.

I count myself lucky that it was a single fear based warning bite and Baxter wasn’t actually trying to rip me up. Baxter was lucky that he chose me of all people to prove just how ‘unfriendly’ he could actually be; had this have happened to some stranger on the street, it is likely that animal control would have been involved and who knows what might have happened. So what became of Baxter?

Baxter lived with me and my pack for 6 weeks where he learned obedience, manners, impulse control, and above all else, proper social skills. When he went home, he was a new dog, one who now greets everyone calmly, confidently, and under control; he can even be found lazing around the local nursing home from time to time and is welcome back in my home any time. As for me, I will wear the scars from that day on my face and neck for the rest of my life as a constant reminder to never underestimate the power of a ‘friendly’ dog. As for you, I hope you will see this as a cautionary tale and understand that just because your pushy, dominant, or out of control dog has never bitten before, does not mean that they never will, so take precautions, be proactive, and start training today!

Are you at your wits end with your dog’s behavior and would like to have control, sanity, and above all else, safety? No matter the age or breed, please contact me now,  I promise you, I can help!

Find a trainer near you!